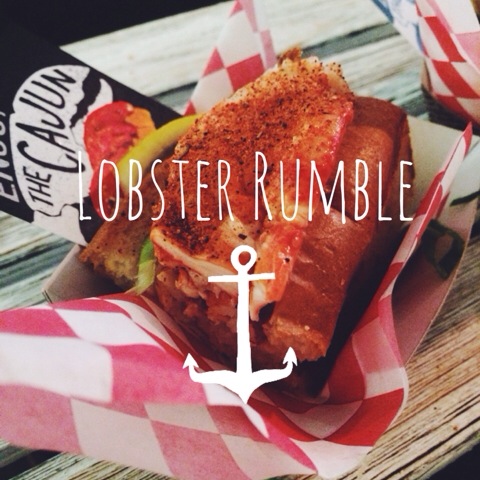 On August 1st, 2014 fifteen lobster rolls battled head-to-head in Tasting Table’s 2014 Los Angeles Lobster Rumble. While all participating restaurants were heavyweight contenders, only one would come out victorious to claim the title of the best lobster roll in Los Angeles. This year, we were fortunate enough to experience one of this summer’s most exciting culinary showdowns. The event was held at the eclectic Cooper Design Space and featured a plethora of lobster rolls from various seafood restaurants such as Lobster Me, Santa Monica Seafood and much more. Claws were out, gauntlets were thrown and boy, did it make for some good eating! Here are some of the highlights from the night.

This was one of the first lobster rolls we tried. Piled high with large chunks of lobster meat which were seasoned with a Cajun dressing, this lobster roll packed a bit of heat. The bold and assertive flavor held a nice contrast against the chilled and buttery lobster meat. This was definitely the start of some serious competition!

Slapfish’s lobster roll was interesting because it’s unique presentation was different from many of the other lobster rolls we sampled. Instead of buttered chunks of lobster meat, the lobster was tossed with their creamy signature Slapfish sauce and slapped onto a buttery, toasted roll. Hey, it never hurts to stand out from the crowd!

While there were plenty of lobster rolls to be enjoyed, you can’t forget about the sides. This beautiful salad bar was stocked with all the condiments you could think of including watermelon gazpacho pictured to the right.

Some contenders included their own sides such as Old Port Lobster Shack from Redwood City, CA. The cole slaw added a nice crunch and was a delicious accompaniment to the lobster roll.

The Strand House got extra creative with their lobster roll and served up house-made Siracha chips alongside it. This lobster roll featured chives and a rich brown butter Hollandaise–truly decadent.

Besides lobster rolls, the Lobster Rumble also featured open bar refreshments such as Bordeaux Wine Bar, Stella Artois Bar and Tito’s Cocktail Bar. There were also dessert places from all over LA, ready to serve up some major sweet treats to those who still had room. The dessert station was teeming with top local dessert purveyors. Truly fit for the foodie, these desserts were fun, innovative and of course, delicious! Kettle Glazed Donuts had plenty to brag about at their table. With their beautiful mini donuts, you could just keep popping into your mouth and not even notice how many you’d eaten because they were just that good. Crème Caramel LA featured their signature original custard and a new food favorite that’s been taking up the culinary world by a storm–ube.